What's on your mind?

Noticed your OC, there's a place for that.

PLANT THE FLAG OF SDS ON THIS WIKI

(If you can't tell this is supposed to be what i think a falinks would say while claiming land in the wild, however i made it more cringe because it's roleplaying.)

Minor detail, but does Rachel actually knock someone out? The wiki makes it seem that she does. And it’s kickboxing, not boxing, I think

This is the place to talk about your favorite topic, to share news, theories, ideas, and to connect with others. The content from your Forum has been converted to Discussions posts, so nothing has been lost.

To learn more about what you can do here, check out community.wikia.com/wiki/Help:Discussions

If you're an admin on this community, read more about how you can customize your Discussions and set up guidelines for contributors: community.wikia.com/wiki/Help:Admin_and_Moderator_Tools_in_Discussions

I would like to know if I have the right Features to be patroller and chat modator.

and if I do get the seat I'll try my best to help this wiki as long and as far as I can.

Lucky Fred Wiki gets big updates and it is on its birthday! Updates includes the chat re-revamp, feature change and redesigning, etc.

Well, here are the updates:

All aliens in their infoboxes will have the

image next to their species thus replacing the "(Alien)."

Some badges got replaced either by better quality or renewal. Also, Wiki Love track finally gets its customized badges.

The "Category:Real world games" will merge with "Category:Games" to specify the games more, they will be sub-categorized and will give a little more space to the Wiki Navigation.

The Wiki has just joined the Nickelodeon Wikis, and the proof of it's membership, the Template:NickWikis, has just been added to the Main Page.

Note: This update does not imply a hierarchical standing. The titles shown on users (e.g. Admin), are for FUN ONLY.

ChatMod "Star" icon has replaced with the

(Protectors badge). All of the Top Cadets (Administrators) and Agents (Chat Moderators) will bear this badge inside the Chat Room.

Administrators/Sysops' title has been changed from General to Top Cadet.

Inactivity indicator has been added to every user in this wiki.

Please Note: "INACTIVE" title will appear on a user page after 1 month of inactivity. 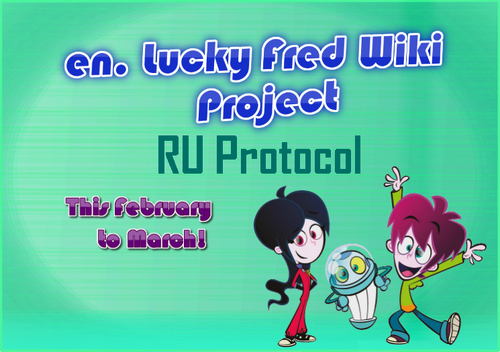 The RU Protocol (Revamp and Update/Upgrade Protocol) is a procedure that will start on late of February to mid or late of March. This is in response and in thanks of the new users who have contributed since December last year, where it has reached the required number of users to initiate the procedure. It's main purpose is to reinforce and improve the Wiki's framework and infrastructure that would also attract more contributors and readers alike. From the previous updates, this will be the biggest of all unlike the Infobox Revamp was just like a few stair steps, but this one will be like staircases to the next floors way above. 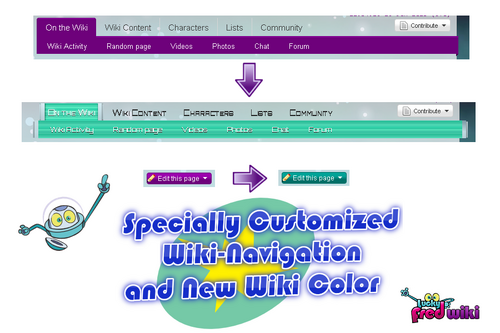 The Wiki has now a specially customized Wiki-Navigation replacing the basic version and has changed its color from Indigo to Pine Green. Indicating that there's going to be big changes around here.

Special Thanks to: DEAD SPACE Wiki for the coding. 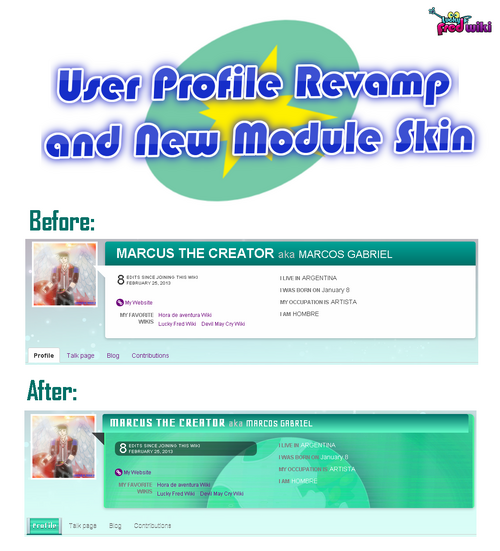 The Wiki has now has its own skin and that users would like to see that their looking at something cool to look at.

Special Thanks to: Wikia Developers Wiki and Pokémon Wiki for the coding.

Note: This update does not imply a hierarchical standing. The titles shown on users (e.g. Admin), are for FUN ONLY.

Bureaucrat title has been changed from "Grand Protector" to "Elite Guard". 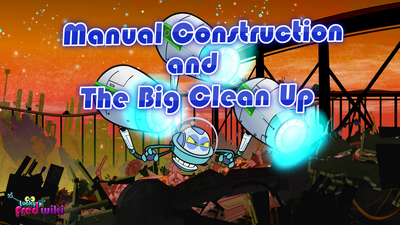 Construction of the Manual of Style has now commenced, which is also treated as the Wiki's Policy and Extended Rules and takes effect immediately! With it's very first Maintenance Operation:The Big Clean Up, focuses on enforcing the Manual and deleting the ".jpg" images and replacing it with ".png" images. However not all were replaced, because some were cropped and a duplicate to the bigger ones so they have to be deleted without any needed replacements. This ends Phase 1 of RU Protocol. 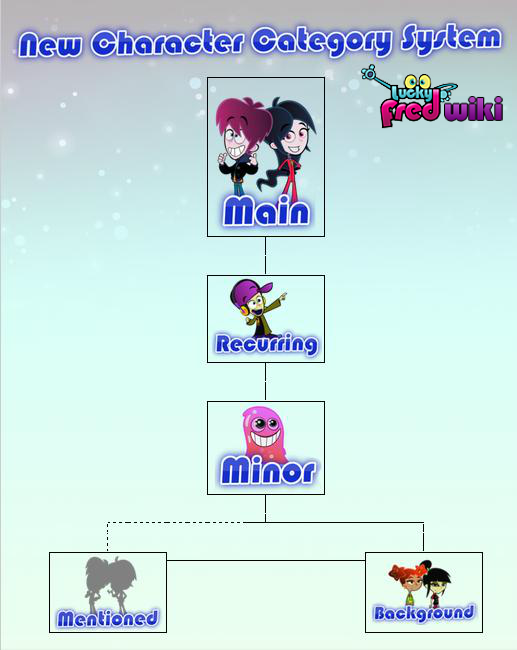 Note:I have to take the picture just to fit it in the forum post, the template's too wide too fit in.

Introducing the New Character Category System, one reason is to point out the ranks of each character(s) from lesser than minor characters to the Main Cast (which is far better than previous version). This system shall reorganize each of the character(s)'s stand in the show and shall also replace the old one that only has two category standings: Main and Minor characters, unlike the new that has five: Main, Recurring, Minor, Background and Mentioned characters. 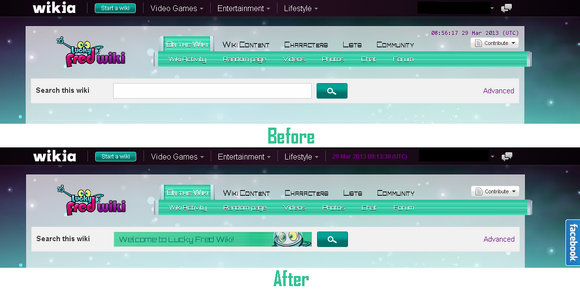 Social Networking has been one of the keys to Wiki's success in communicating with people with a common interest and share of information, resources, etc. So I thought, how about the link to the Wiki's Facebook page would be always be there no matter where you are in the Wiki, so you can get connected milliseconds faster than before.

Friday is now our guide in the Wiki's search engine which makes it a lot cooler than before. So try it out now, to search something you want to see.

Special Thanks to: BlazBlue Wiki for the coding.

Wiki's clock position has been relocated from just above the "Contribute" and "Share" button to the left of your own "User Profile" link.

Special Thanks to: Rune Scape Wiki for the coding.

The Wiki now has a total 4 backgrounds that shall appear at random, no longer using just one background at a time. No, from now on there should be more backgrounds to have in this wiki that everybody would like to see.

Special Thanks to: DEAD SPACE Wiki for the coding.

And last but not least, is the Chat Revamp which would add background to it, the background was chosen by a majority vote with a difference of 1 vote with the second.

Special Thanks to: Penguin-Pal for the coding.

This ends Phase 2 and also the final "touches" for the RU Protocol's completion. For this completion, more edits would come in the future.

The Cast (or Voice Actors) and the Crew (re-categorized to production team and other future categories) shall be sub-categorized to Category:Cast and Crew.

A proposal of merging the 3 other wikis has approved by Wikia Support. Considering the 3 wikis might be abandoned, a notice (Merge Proposal) has bee sent to them, with no response at all. It has been considered that these wikis were inactive for more than 30 days.

These wikis have now merged with this Wiki:

Images and Galleries Clean Up 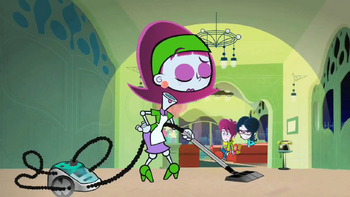 15 images have been deleted (all of them are screenshots) and have been removed from 10 articles due to:

20 images have been deleted and have been removed from 13 articles due to the file type of being .jpg(s) and had to be replaced with .png file types.

With the Wiki's growing competitiveness in Google Search Rankings, the Wiki will not also just focus on editing and expansion but also in designing and art work which also makes a page a lot cooler. This ain't just this and that, this is the beginning of adaptation and change (more like evolution), so expect or not expect for there are more edits and updates to come, so keep editing and reading.

Lucky Fred Wiki is now member of two different channel wikis (Disney Channel Wiki and the other being Nickelodeon). That makes the Wiki a Dual-Affiliated one with the Original Channel Wikis where the show "Lucky Fred" was aired ever since.

Twitter feed has been added to the main page for easier conversation while being in the Wiki and do some tweets via Twitter feed at the same time. Feel free to tweet for comments and questions about the Wiki. Follow us via @LuckyFredWiki on Twitter.

Note: Twitter feed is either found on the Main Page or on Wiki Activity's Community Messages.

(edited by RGL Victor The Great)

Oh, hello there <insert name here>, you feel like you need more options to help this wiki and rise up to the challenge then please apply for Adminship (including Rollbackers and Chat Moderators). Please read the following below before filling an application.

However, there are some requirements to be one, please read:

"Thank You and Happy Editing!"

For other sources of help, please see the help category.