Agent Alpha One is the fifth episode in the first season of Lucky Fred.

Brains is a big fan of agent Alpha One, and now she has to go on a mission with him.

In Brains's lab, the Super Commander informs her that an enormous mutant octopus is detected in her area. Brains takes action but was halted by her father and informs her that Cyborg HH has arranged to send a specialist to lead the mission and to get ready for an "LT (lemonade and towels) Protocol" which means being a glorified maid with the city being endangered. Then at the back of the Super Commander, Cyborg HH came in, the Super Commander forgot to tell to her daughter that it's Cyborg HH's 20th Anniversary as a Protector and to show her the code combinations of the mysterious specialist. On Cyborg HH's tables revealed the two combinations, an alpha symbol (α) and the number one (1) and that mysterious specialist happens to be Agent Alpha One, a hero to admire by Brains.

Meanwhile at Fred's place, Fred and Friday were playing the game of "Whac-A-Worm" for 5 hours, 5 minutes and 5 seconds flat, then moments later he faces the Boss of the game and beats it. As Fred and Friday were celebrating, they heard Brains doing the same thing and Friday thinks that an alien has sucked her brain out.

When the both of them went to see Brains to her house, she is excited and can not stop talking about her hero, showing them videos and other products to Fred and Friday, however, Fred is disgusted and doesn't like him not one bit. Fred checks the "Agent Alpha One" action figure, hears it talking, and not showing any interest. Brains claims that Alpha One is a real hero who has save the planet for thousands of times all caught on film and does not play video games. Friday challenges Brains of what Alpha One has that Fred doesn't, Brains replied that Alpha One is such a great Protector, the Protectors use him in all the training videos at the academy and he's got real style. Fred could not believe what he heard, in response he says that he has just as much "style" as Alpha Zero (One). Brains had enough with the talking, so she gives a couple of DVDs to Fred of hoping maybe he could learn something from Alpha One. Then after the conversation with Brains, Agent Alpha One had arrived and Brains had to send Fred and Friday out of the house for an official matter.

Outside of Earth's atmosphere, Brains (still the same) got fascinated and curious of the ship's interiors, so curious she even pushed a button on a screen receiving makeup. Seconds later, the ship's surveillance detected a mutant octopus being above ground and needs immediate intervention. Brains quickly gets ready for combat, Alpha One on the other hand, does nothing and gives his third order to chill and sort out the most important thing of all: wardrobe. Alpha One starts picking out clothes to wear, he asks Brains of what the color of the monster is, she replies and thinks that it's Green, Alpha One got the perfect outfit and makes a statement for Brains to take note that "Our first weapon is always a great outfit".

Brains agrees to Alpha One's statement and both her and Alpha One got suddenly entangled by a mutant octopus from below. Brains requests permission to activate Electrical Discharge, Alpha One immediately tells her to do it, receiving permission, she activates the ship's electrical discharge thus shocking the octopus and letting them go. Alpha One in anger (believing that this was all an act) exclaims that he's going to teach that "puppet" a lesson. Brains became perplexed about him mentioning the word "puppet" and doesn't want to hear it again, so she landed the ship immediately.

Back on the ground, Alpha One went out first while Brains backs him in the rear. Still believing that the entire mission was all acting, Alpha One walks with composure makes contact with an octopus as if it were just part of the props. As they faced with the mutant octopi, Brains and Alpha One were left helpless. Moments later, the Super Commander appears on her watch and informs her that Cyborg HH had her tables crossed and didn't meant to sent Agent Alpha One and that he is not an agent, but an actor and the agent who was supposed to be sent was Agent One Alpha. Trapped and with nowhere else to run she calls Fred for help. She informs that they need Friday and she and Alpha One are at the industrial zone in southeast of the city.

Fred becomes worried and takes action by turning Friday into a much more impressive spaceship than Alpha One's. As they arrived to their rescue, discovering that octopi are in the same way that his game "Whac-A-Worm" and ends as if playing. Fred commands Friday to become a Worm Whacker spaceship and begins whacking some octopi and beats them all, later they face the biggest of them all, the "Big Red Head" nicknamed by Fred as Mr. Squid.They first tied the octopus with its own tentacles and Fred whacks it with his best whack. Moments later, all of the mutant octopi were liquefied and gushed out of the sewers that it spewed all over Friday's spoilers.

After defeating the mutant octopi, they were all at Fred's house, Fred and Alpha One were playing "Whac-A-Worm," to teach Alpha One on how to fight real aliens, at least. 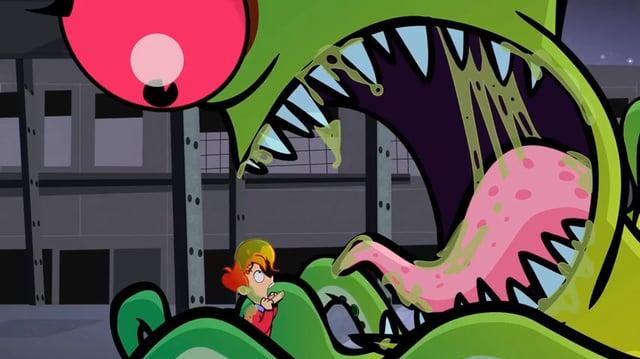 Agent Alpha One
Add a photo to this gallery

Retrieved from "https://luckyfredipedia.fandom.com/wiki/Agent_Alpha_One_(episode)?oldid=17646"
Community content is available under CC-BY-SA unless otherwise noted.