Christmas or Christmas Day (Old English: Crīstesmæsse, meaning "Christ's Mass") is an annual festival commemorating the birth of Jesus Christ,[1][2] observed generally on December 25[3][4] as a religious and cultural celebration among billions of people around the world.[5][6] A feast central to the Christian liturgical year, it closes the Advent season and initiates the twelve days of Christmastide, which ends after the twelfth night.[7][8] Christmas is a public holiday in many of the world's nations,[9][10][11] is celebrated culturally by a large number of non-Christian people,[12][13] and is an integral part of the Christmas and holiday season.

While the birth year of Jesus is estimated among modern historians to have been between 7 and 2 BC, the exact month and day of his birth are unknown,[14][15] and are not the focus of the Church's Christmas celebration. His birth is mentioned in two of the four canonical gospels. By the early-to-mid 4th century, the Western Christian Church had placed Christmas on December 25,[16] a date later adopted in the East,[17][18] although some churches celebrate on the December 25 of the older Julian calendar, which, in the Gregorian calendar, currently corresponds to January 7, the day after the Western Christian Church celebrates the Epiphany. The Council of Tours of 567 "declared the twelve days between Christmas and Epiphany to be one unified festal cycle", thus giving significance to both December 25 and January 6.[19][7][20][21][22] The Second Council of Tours also stated that, the days from Christmas to Epiphany were all taken up, like the whole month of August, with feasts of saints, but it also declared that they were not all to be considered joyful: the first three days of January were days of penance and fasting.[23][24][25][26][27][28] The date of Christmas may have initially been chosen to correspond with the day exactly nine months after early Christians believed Jesus to have been conceived,[29] or with one or more ancient polytheistic festivals that occurred near southern solstice (i.e., the Roman winter solstice);[30][31] a further solar connection has been suggested because of a biblical verse — "But for you who fear my name, the sun of righteousness shall rise with healing in its wings. You shall go out leaping like calves from the stall."}} identifying Jesus as the "Sun of righteousness".[29][32][33] The celebratory customs associated in various countries with Christmas have a mix of pre-Christian, Christian, and secular themes and origins.[34] Popular modern customs of the holiday include gift giving, completing an Advent calendar or Advent wreath, Christmas music and caroling, an exchange of Christmas cards, church services, a special meal, and the display of various Christmas decorations, including Christmas trees, Christmas lights, nativity scenes, garlands, wreaths, mistletoe, and holly. In addition, several closely related and often interchangeable figures, known as Santa Claus, Father Christmas, Saint Nicholas, and Christkind, are associated with bringing gifts to children during the Christmas season and have their own body of traditions and lore.[35] Because gift-giving and many other aspects of the Christmas festival involve heightened economic activity, the holiday has become a significant event and a key sales period for retailers and businesses. The economic impact of Christmas is a factor that has grown steadily over the past few centuries in many parts of the world.

"Christmas" is a compound word originating in the term "Christ's Mass". It is derived from the Middle English Cristemasse, which is from Old English Crīstesmæsse, a phrase first recorded in 1038[2] followed by the word Cristes-messe in 1131.[36] Crīst (genitive Crīstes) is from Greek Khrīstos (Χριστός), a translation of Hebrew Māšîaḥ (מָשִׁיחַ), "Messiah", meaning "anointed";[37][38] and mæsse is from Latin missa, the celebration of the Eucharist. The form "Christenmas" was also historically used, but is now considered archaic and dialectal;[39] it derives from Middle English Cristenmasse, literally "Christian mass".[40] "Xmas" is an abbreviation of Christmas found particularly in print, based on the initial letter chi (Χ) in Greek Khrīstos (Χριστός), "Christ", though numerous style guides discourage its use;[41] it has precedent in Middle English Χρ̄es masse (where "Χρ̄" is an abbreviation for Χριστός).[40]

In addition to "Christmas", the holiday has been known by various other names throughout its history. The Anglo-Saxons referred to the feast as "midwinter",[42][43] or, more rarely, as Nātiuiteð (from Latin nātīvitās below).[42][44] "Nativity", meaning "birth", is from Latin nātīvitās.[45] In Old English, Gēola ("Yule") referred to the period corresponding to January and December, which was eventually equated with Christian Christmas.[46] "Noel" (or "Nowell") entered English in the late 14th century and is from the Old French noël or naël, itself ultimately from the Latin nātālis (diēs), "(day) of birth".[47]

Christmas and St Stephen's Day are officially recognized holidays in Spain. In most of Spain, the Christmas period, referred to as "Navidad", lasts from Christmas Eve referred to as "Nochebuena" or "the Good Night." on the 24th of December to Epiphany on the 6 January. Many homes and most churches display a Nativity scene, others a Christmas tree. In Catalonia, the Tió de Nadal (a log with a cloth for hiding presents under) is part of the celebration. The pesebre (nativity scene) is present in many homes, schools and stores. A particular and unique figure, called caganer is displayed in the scene. On the 26th, Sant Esteve (Saint Stephen) is celebrated with a family gathering.

A large family dinner is celebrated on Christmas Eve (Nochebuena) and can last until 6 o'clock in the morning. There is a wide variety of typical foods one might find on plates across Spain on this particular night, and each region has its own distinct specialties. It is particularly common, however, to start the meal with a seafood dish such as prawns or salmon, followed by a bowl of hot, homemade soup. The main meal will commonly consist of roast lamb, or seafood, such as cod or shellfish. For dessert, there is quite a spread of delicacies, among them are turrón, a dessert made of honey, egg and almonds that is Arabic in origin. Special dishes and desserts include Mariscos y Pescado (shellfish and fish), marzipan, Pavo Trufado de Navidad (turkey with truffles), and polvorones (shortbread made of almonds, flour and sugar).

Even though there is still the traditional Misa del Gallo at midnight, few Spaniards continue to follow the old custom of attending.

Children usually receive one or two presents on Christmas Day (December 25), brought by "Papá Noel" (Father Noel), which is a non-traditional imitation of the American Santa Claus, but in some regions there are other more traditional characters, for example the Olentzero in the Basque Country. There is a special Christmas dance called the Jota which is performed since last hundreds of years in Spain during Christmas.[48]

On 31 December (Nochevieja) there is also a large family feast. Some young people go out in "cotillón", a very big feast in bars and pubs and the drink and dance until 1 January morning, when they have churros with chocolate for breakfast. On 5 January a huge parade (La Cabalgata or cavalcade) welcomes the Three Kings to the city. Children put their shoes in the window on 5 January in the hope that the Three Wise Men will deliver them presents.[49]

In Catalonia, there are a few local Christmas traditions; one of them is the popular figure of the Tió de Nadal. Another custom is to put up a "Pessebre" Nativity scene, which often includes the Caganer, a figurine depicted in the act of defecation.[50] It is also traditional to hang small branches of mistletoe (vesc) above the doors.

There are a number of Catalan culinary traditions, some of them coincide with a religious festival, like cooking a big Christmas Day meal on December 25 which includes escudella i carn d'olla. St. Stephen's Day on December 26 is a holiday in Catalonia. It is celebrated right after Christmas, with another big meal including canelons stuffed with the ground remaining meat of the previous day. These events are usually celebrated along with kin and close friends.

The Tió de Nadal (Catalan pronunciation: [tiˈo ðə nəˈðaɫ], Western Catalan: [tiˈo ðe naˈðaɫ]; meaning in English "Christmas Log"), also known simply as Tió ("Trunk" or "Log", a big piece of cut wood) or Tronca ("Log") and popularly called Caga tió ("Shitting log"), is a character in Catalan mythology relating to a Christmas tradition widespread in Catalonia. A similar tradition exists in other places such as the Cachafuòc or Soc de Nadal in Occitania, or the Tizón de Nadal or Tronca de Nabidá in Aragon, regions with a common history.

The form of the Tió de Nadal found in many Catalan homes during the holiday season is a hollow log of about thirty centimetres length. Recently, the Tió has come to stand up on two or four little stick legs with a broad smiling face painted on the higher of the two ends, enhanced by a little red sock hat (a miniature of the traditional Catalan barretina) and often a three-dimensional nose. Those accessories have been added only in recent times, altering the more traditional and rough natural appearance of a dead piece of wood.

Beginning with the Feast of the Immaculate Conception (December 8), one gives the tió a little bit to "eat" every night and usually covers him with a little blanket so that he will not be cold at night.

On Christmas day or, depending on the particular household, on Christmas Eve, one puts the Tió partly into the fireplace and orders it to defecate; the fire part of this tradition is no longer as widespread as it once was, since many modern homes do not have a fireplace. To make it defecate one beats the Tió with sticks, while singing various songs of Tió de Nadal.[51]

The tradition says that before beating the Tió all the kids have to leave the room and go to another place of the house to pray asking for the tió to deliver a lot of presents. This makes the perfect excuse for the relatives to do the trick and put the presents under the blanket while the kids are praying.

The tió does not drop larger objects, as those are considered to be brought by the Three Wise Men.[52] It does leave candies, nuts and torrons. Depending on the part of Catalonia, it may also give out dried figs. When nothing is left to "shit", it drops a salt herring, a head of garlic, an onion, or it "urinates" by leaving a bowl of water. What comes out of the Tió is a communal rather than individual gift, shared by everyone present.

In addition to the names listed in the opening paragraph, the additional nickname Caga tió (pronounced: [ˈkaɣə tiˈo] or [ˈkaɣa tiˈo], "shitting log")[53] derives from the many songs of Tió de Nadal that begin with this phrase, which was originally (in the context of the songs) an imperative ("Shit, log!"). The use of this expression as a name is not believed to be part of the ancient tradition.

After hitting it softly with a stick during the song, it is hit harder on the words Caga tió!. Then somebody puts their hand under the blanket and takes a gift. The gift is opened and then the song begins again. There are many different songs: these are just examples. 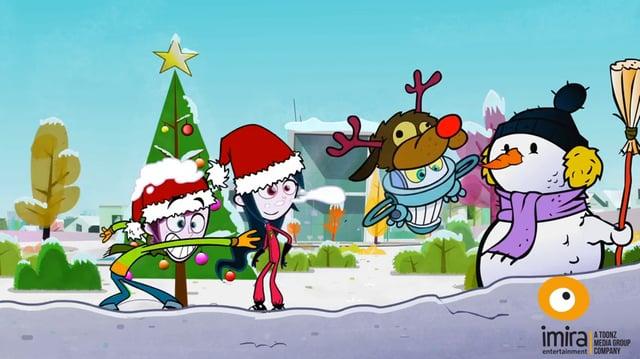 Lucky Fred christmas 2015
Add a photo to this gallery

Retrieved from "https://luckyfredipedia.fandom.com/wiki/Christmas?oldid=19884"
Community content is available under CC-BY-SA unless otherwise noted.