June 6, 2013[2]
Coach Dad is the twenty-fifth episode in the first season of Lucky Fred.

Fred's dad becomes the new gym teacher and Fred is not happy about it.

On a relaxing Sunday morning, Fred and Friday were playing video games. The gaming only lasted until his dad's voice was heard and he had to quickly hide Friday from being seen, so he hid and also sat on top of Friday. As Simon entered his son's room he immediately stopped Fred from playing video games, starts talking about exercise and chores, also putting the two together and making it a contest where people compete for Gold medals in the first annual "Chore-cathlon" and the best part is: "We (Fred and Simon) do it together!". After the father-and-son conversation, Simon informs his son that he'll meet him 15 minutes for breakfast and leaves to get started. While Fred was thinking of what to do, Friday comes out of hiding and wonders about Fred and his dad's relationship. Then Fred makes a plan of instead doing the "chore-sorecise" with his dad, he tells Friday to do chores for him. After all the chores were done, Fred goes to kitchen and surprises his dad with the entire place being spotless. As for the contest, Simon then gives Fred his earned Gold medal, but Fred had already left and went back to his room playing video games again. Some time later at the basement, Fred's mom was sparring with his dad and at the same time his dad was kind of disappointed of not spending time together also missing his son's days when he didn't know how to do anything. Raquel understands the circumstances, so she gives her husband an idea to spend time with his son and at same time knocking him out unintendedly.

The next day, Simon carries his son all the way to school on foot which also embarrasses him in front of other students. After Fred left his father's embracing arms, his dad meets up with his gym teacher Coach Arruga who is looking for his substitute for his class. Simon happily agreed to lend a hand to Coach Arruga which gives him more time to spend with his son and his fellow classmates. Most of the students couldn't believe it and Fred with no idea at all. Simon starts it off with a new exercise he made up called the "10-count push-up" and calls his son to demonstrate it with him. As for the demonstration, Fred could barely keep up with his dad not noticing. Simon calls the other students to the same, but the only one who could do it was Braianna who was so excited from the start while most of the students were in exhaustion and in pain. After the class, all of the students were still painfully exhausted of Coach Luckpuig's execises except for Braianna who got more energy now thanks to him. Before leaving school, Fred puts his "Grave Night" book to his locker and as for Sir Percival he asks Fred to do something about his dad, warns him about everyone in school of hating him and leaves.

Later back at his house, Fred was wondering of what to do and eats a carrot dipped with Guacamole while he's at it. Friday on the other hand is collecting data by consuming the Guacamole. As Friday was still consuming the Guacamole, Fred's dad made his presence so Fred had to hide Friday behind his back. While Friday was behind Fred's back, Fred asks his dad about excusing the students the who can't keep up, Simon replied that the students are treated the same unless they have a note from the parents. Later at Fred's room, Fred commands Friday to turn into a pen, write like Sir Percival's mom and make a false excuse note for Sir Percival.

The next day at school, Sir Percival got excused and gives two thumbs up for Fred for getting him out while the other students were in disbelief. Later again in the gymnasium, Fred and Thomas does a set of push-ups and again but with sandbags. Thomas also couldn't take his friend's dad, so he asks Fred to the same what he did to Sir Percival. Sometime later at school grounds, Fred gets 4 thumbs up from Thomas and Sir Percival and Braianna was getting curious and asks Fred about it. Fred whispered that he "pulled a few strings" from his buddy (Friday) and Nora listened closely to Fred's whisper and asks him to pull a few strings for her. Fred was so mesmerized by Nora, he also agrees to help her, eventually the whole class would have known and would have also did the same. Leaving him and Braianna the only two unexcused, Braianna wonders of an alien virus on the loose causing an outbreak of diseases, Fred replies of the other students having notes excusing them from class and suddenly Friday also joins the conversation telling Fred made him write the notes for everyone. Fred's dad also joins the conversation and informs them that he and Coach Arruga are deciding if he should stay as their permanent gym teacher, then takes the lead.

Later outside of the school, Braianna couldn't believe Fred that he used Friday to write those phony notes. Fred replies that he knows that he he sorta liked lied to his dad but it was also like he did a favor for his buddies. Braianna hopes that he is not going make anymore of those fake notes, but Fred admitted that he made another fake note as part of his plan of not getting his dad to permanent status. As Coach Arruga arrived, Fred commands Friday to do a massages on him to put him in the best of health. Rejuvenated, Coach Arruga admits that the only reason he needed Fred's dad to takeover was so that he could visit his grandmother and his dad being so determined to spend time with his son that he won't leave. Coach Arruga asks Fred to just go fishing with his dad like normal fathers and sons, Fred agrees that'll ask him.

Back again at the school grounds, Coach Arruga thanks Coach Luckpuig for helping the class and for helping him call all of the excused students' parents to find out that none of them were really sick. Coach Arruga also gives extra thanks to his substitute for showing him and his students that doing chores can also be great exercise and puts it to the test by putting all of the students on lawn mowers like they should have been. Simon also thanks Coach Arruga for keeping Fred out of gym class and gives him a note (which is also phoney one).

At the docks, Fred and his dad went fishing just spending time for themselves to hangout like normal a father and son would with no video games, no television, no weight machines and no smoothie blenders. Moments later, they got bored and took their separate ways but got pulled by their own strings. 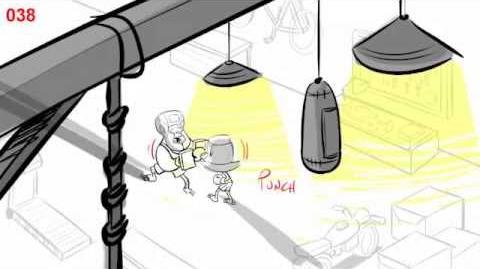 Retrieved from "https://luckyfredipedia.fandom.com/wiki/Coach_Dad?oldid=19864"
Community content is available under CC-BY-SA unless otherwise noted.