Girlfriends Are a girl's Best friend

Brains and all the girls are obsessed with a series of romantic books.

The boys were talking about food, looking at other tables, and at the girl's table they see not just food but books as well. They wonder why all the girls in school (except Braianna) are obsessed with the book "Grave Night," a story between a human (Sissy) and zombie (Zander). When questioned by Fred that she is not a normal girl, but she loses focus as she looks at Eddie's bowl of weeds and insects and eats one of its contents called as Gryllus assimilis.

Later at her lab, Brains was talking to Fred about being a regular girl, was also training with air-filled fake aliens and at the same time thinks on how to be a normal girl. Fred recommends that reading the books as all other girls do. Brains quickly agrees to Fred's recommendation and leaves the lab to change her clothes. As for Fred, who's left alone in the lab, he starts his own training and gets scared off by one air-filled fake alien, thus forcing him to leave the lab.

Later at Fred's room, she then starts reading the books with Friday together with the data absorption helmet, instead of turning pages like everyone else. Seconds later, Braianna and Friday became interested and Braianna asks Fred to keep Friday for five more volumes, begging for it, Fred could not say no.

The next day of school at Mr. Tonsils's class, Braianna raises her and asks permission from the teacher to allow her to pass a note to Nora. Mr. Tonsils who was shocked gives permission to pass the note. Then Braianna passes the note to Nora, Nora looks at it with nothing to read. Braianna explains that the note is written with heat reactant invisible ink conflating proof paper that needs to be heated to 200° and is a list of the perfect presents Sissy who gives Zander for his birthday. Nora couldn't believed it and so as the girls surrounding her. She then asks permission from Mr. Tonsils of using the microwave in the teachers' lounge as a "girl thing". Mr. Tonsils wipes his nose then agrees to give her the permission. All of the girls in the classroom went out and left the boys with no idea on what they just heard.

The next day at the school building's entrance, Fred takes more notice as he encounters and compliments Braianna wearing "Grave Night" merchandise. Braianna thanked Fred's compliment and gives him a book called "Boys' Guide of being like Zander" in a Grave Night sale, but rejects it because he hates it with no interest on those books and he just made of chuckle on one part. Later at the cafeteria, Thomas gets the same food again, same with Fred and Sir Percival. As Braianna passes by the boys, Fred takes notice and save her seat. But Brains ignores Fred and approaches the girls' table leaving the boys at the other table in shock. Fred was in shock for moment but thinks twice of Braianna coming back. While at the girls' table, Braianna starts eating with the turkey leg and taking notice from Nora. Braianna explains that she eats it exactly like Sissy eats on her first date with Zander and more talking. Spending more time with the girls, has put a little jealousy on Fred.

Later at Fred's room, Fred starts thinking of way to get Brains away from all the Grave Night stuff. On the other hand, Friday, who also liked the books, begins to imitate Zander. But Fred who could care less on those books and leaves with both confusion and frustration.

At the school building's entrance Nora and Braianna are still talking about Grave Night and at the same time Fred sets up a trap for Braianna about a Sneek Peek of Grave Night Volume 48 at her lab. Braianna quickly makes haste.

Later at the lab, Fred has got Braianna where he wants him with the help from Friday to extract the information of the books with the helmet. However, the helmet's only purpose was to absorb information. Brains also sets up a trap for Fred, Friday then changes sides with Brains, fortunately, Fred manages to escape.

So begins a discussion that ends up being a chase. Fred goes to a park and hides in a tree, but Friday and Brains had him cornered. Fred then quickly commands Friday to transform into a parachute to save him, while making another escape he and Braianna talk about what happened, and admitted that they missed hanging out, then Fred and Friday got stuck on another a tree. Braianna then assures Fred to not use the data absorption helmet and she'll just read him one chapter, Fred then finally agrees. Some time later, it was already dark, Brains finishes the first chapter, but Fred and Friday were interested on what happens next, telling Brains to keep reading. She replies "Boys, bedtime" and opens the book again. 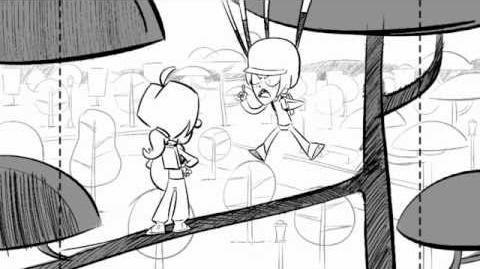 Retrieved from "https://luckyfredipedia.fandom.com/wiki/Girlfriends_Are_a_girl%27s_Best_friend?oldid=17671"
Community content is available under CC-BY-SA unless otherwise noted.